In his own words:

I’ve been doing “IT” since early 1983. Screaming the blues. My first band was CHIPS PATROLL doing hardcore punk/thrash stuff. We changed our name to The Unaccepted, played shows with bands like The Necros & M.I.A. in Chicago, Springfield, & Peoria. After being kicked out of the band I started BLOODY MESS & HATE in 1985 doing obnoxious punk covers & hardcore punk rock originals. We played shows with bands like GG Allin, A.O.D., Happy World, Naked Raygun, and 10-96 in Champaign Illinois, Creve Coeur, & Kenosha Wisconsin where I made some great friends for life. In 1988 Bloody Mess & The Skabs were formed. I spent the next 8 years in a revolving door of musicians and utter chaos. In 1989 the band was signed to Black & Blue Records & we did a few 7 inch records, an album & CD’s. We played with bands like Beautiful Burt & The Crotch Crickets, Safe Sex, Rednecks In Pain, Psycho & others playing New York City, Philadelphia, Deleware, Milwaukee, St. Louis, Davenport, Indianapolis, Cleveland & more. During this era I appeared on the Nationally syndicated PHIL DONAHUE show, as well as ROLONDA. The band and I were featured on a TV show in England called PASSENGERS at one point & I also was a guest on a BBC radio program. The band made newspaper headlines both locally & nationally when art was used on our first record that was drawn by serial killer John Wayne Gacy. More articles appeared when serial killer Kenneth Bianchi (one of The Hillside Strangler killers) created the poster for our “Empty” 7". The band was banned often from clubs, halls & parties because of destructive stage shows and all around chaos & debauchery. After burning the flag onstage in Davenport, Iowa the band made the front page of at least 5 different Iowa & Illinois newspapers and death threats followed. I quit the band in 1993 (or was it 94?) during the Hungover & Stoned East Coast tour. Enough was enough. I decided to check out the outlaw country scene and in 1995 I assembled a band, wrote/recorded The Bloody & The Country Trash Punks 7" record for BALONEY SHRAPNEL RECORDS of Phoenix, Az. The record was premature in the vocal department as my education doing country vocals was still to come. Never-the-less it’s a cool little record with fantastic musicianship: steel guitars & all. Next in 1996 I formed a working outlaw country band called THE RENEGADES. We earned 40 or so covers of classic country hits by Johnny Cash, Waylon, Willie, David Allan Coe, Merle Haggard, Freddy Fender, Hank Junior and others, and we played a shitload of gigs in Illinois. We played every honky tonk, redneck dive & even the “Dew Drop Inn” in Peoria. 75 shows in all. The parallel between punk & outlaw country is obvious with the big difference being the beat & the twang. I finally grew bored of doing this type of music & the band quietly morphed into a rock band called THE VAYNES and we learned rock covers by The Doors, Bay City Rollers, Bowie, The Clash, Blondie, Deep Purple, The Stones & more. We played in bars. Lots of bars. Saw many fights, drank lots of liquor & started wanting to rock out harder but I grew very sick of being in a fucking cover band. The Vaynes morphed into BLOODY & THE VAYNES and what a band! We did some punky ass hard rock & delivered a killer “live” performance always! We played Cleveland, Ohio and Illinois & Wisconsin & recorded an amazing CD for Black & Blue Records. One of the songs from that CD, “MY BLACK LITTLE HEART” got national airplay & was in regular rotation on Rock 106 here in Peoria. We opened a show for Nazareth once in Peoria & I was kicked out for lots of reasons, one was that I annoyed the band (Nazareth), I kept telling them I was “the singer of the opening band” and after the umpteenth time they were livid. Years later Ede & Mister Void put together the Bloody Mess tribute CD called BLOODY & THE BASTARD CHILDREN with lots of cool bands covering my songs and I even got to add two brand new originals to that album. One (ROCK N ROLL SCALLYWAG) was co-written by myself & Wes Beech of The Plasmatics. This album inspired me to get back into doing music again so in 2003 I formed BLOODY & THE TRANSFUSIONS, an awesome punk rock n roll act that played many gigs in its 5 year span. We did two tours of Texas, played all over the midwest & recorded a full length CD for Black & Blue Records that I’m quite proud of. It was the best “LIVE” act I ever had the pleasure of working with. And now? I have returned, full circle, to my hardcore punk roots. If you haven’t yet heard Black & Blue records has finally released the BLOODY MESS: Anti Rockstar CD. It’s a killer 36 song cd containing music from 1985 to 2008! Its a retrospective containing songs not previously released on CD or not released at all. Lots of great songs from my ex bands: Hate, the Skabs, The Vaynes and The Transfusions…

Kenneth Bianchi (one of The Hillside Strangler killers) created the poster art for "Empty" EP.

Per Bloody: In May of 2011, we bought a huge ass cargo van and we (along with our personal photographer, Sarah Jessica Eve) embarked on an 11-state USA tour. We performed In Seattle, Tacoma, Portland, Minneapolis, Chicago, Kenosha, Wisconsin, Peoria, Il, Scottsdale, Arizona, Denver, Long Beach & Concord, Ca. It was the READY WILLING UNSTABLE tour. We had alot of fun & I got to play in so many new places. GOOD times!! And we have only just begun. As I type this, Black & Blue Records are preparing to release our LIVE cd, which was recorded in Peoria on the tour. It's destined to please your infected little ears.

Bloody Mess “Anti Rock Superstar A Retrospective” CD 2009 RUNNING LOW ON THIS ONE...

Finally all the Early year recordings, B-sides and unreleased recordings are on CD!
Bloody brutal, and righteously raw, this Chicago suburbs punk scene vet (now playing in Peoria) has spent a quarter century making ugly, sometimes sludgy, occasionally scary sounds (one song on his new album ends with 5 minutes of coughing) that will cause you to have Bloody Stools (maybe his next band name). The Retrospective CD is an amazing collection for 80′s, 90′s and recent work that plays with everything from hardcore punk to Southern rock/outlaw Americana to just plain trash rock n’ roll, and it’s amazing how solid and hardcore he remains, the quality never dipping (and he looks virtually the same now as then). This is the kind of “easy” music (meaning it allows for ragged edges, cheap recording, and drunken execution) so it’s easy to become fat and lazy doing it, but Bloody always brings the same dedication and enthusiasm a wide eyed teen brings, and the 1985 cuts in the retrospective (which includes rarities, live tracks, unreleased cuts, and a WMAQ radio bit) perfectly fit with the tracks on the new CD.
-Flamin’ Wayman Timbsdayle

The first 12 tracks are with Hate, the next 21 are with the legendary punk rock underground icons The Skabs. Then an alternate version of one of the Vaynes’ songs and 2 brand new tracks from The Transfusions complete the package.

The debut LP from this infamous punk rock band from Peoria IL. This album predates Gabby Skab having blue hair. WOW! Includes “Think Of Punk Rock When You Shit”, “My Own Worst Enemy”, ” the Bottom line” and of course the title track. This is the original Skabs and Bloody with guests including Stevo from Impetigo on 3 tracks. This album was also produced by Larry Evilelf and was always one of his favorites and hopefully yours too!

The final album from Punk Rock Legend Bloody F Mess and his band Bloody Mess & The Skabs. This one is chock full of punk rock and political and social commentary that is sure to strike a nerve. Complete with interview bonus track this one is worth it!

Bloody began his career in Peoria IL with band Chips Patrol and Hate before forming the band he would gain his infamy from Bloody Mess & The Skabs. Bloody and crew played all over and have recorded with the King of Underground music GG Allin. Bloody did a spoken word set on GG’s Hated in The Nation tour that ended in Dallas TX with GG being stabbed. Bloody Mess & The Skabs had 2 full CDS and 4 EPs behind them when they broke up for good in 1995. Bloody tried a C&W diversion with The Renegades and slowly turned back to rock and eventually The Vaynes. This band rocked live as well as on this studio album. Rock N Roll with Punk Rock Lyrics!!! Bloody’s current band is Bloody Mess & The New Disease.

The Numerous rumors over the years became fact the morning of June 28th 1993. he notorious GG Allin died of an overdose in NYC. We all knew he would die young, but since he had originally planned to kill himself on stage, it came as a shocking surprise. Having known GG since about 1983, having done tours with him across the states and having overdosed on drugs and alcohol with him as well during those times. I’m sure as shit that he was the most shocked when he woke up and found himself dead. The content of this compact disc are from tapes I recorded and collected over the years (there are/were others, but they have since been lost, stolen or even worse sound quality than this stuff). The “Live” recordings and the phone conversations speak for themselves and were recorded before during or after the infamous “Hated In The Nation” tours, in which I opened for GG doing drunken spoken word ramblings. The songs recorded with my band , Bloody Mess & The Skabs were recorded when GG came to hang out with me here in Peoria IL. it was 2 nights of extreme alcohol and drug use and it shows in the songs themselves. Not only did we record Trashy Musick, but we spent time getting thrown out of a gay bar and a porn shop, drinking and running from cops in downtown alleys, getting a ride from an undercover narc and popping pills to the point of 2 day nausea. I hope this CD makes you sick as well. GG Allin lives on thru his musick and our memories.

Another Black & Blue release from Punk Rock Legend Bloody F Mess and his band The Transfusions. After The Vaynes broke up due to the infamous Creepy Crawl show in St Louis, Bloody took some time off. Bloody had been playing with various bands until he formed The Transfusions in 2004. After a whirlwind tour in 2006 that ended with 3 dates in Texas Bloody along with Guitarist David Moe, Drummer Billy The Kid and the animated bass and vocals of country boy Lincoln Log set to recording and this is the result. A dozen slices of Punk Rock Stoner classics made to be played loud! Hear Bloody trash radio rock on FMFU, sing about his life on DIVEBAR SUPERSTAR, recap his time in southern TX on MINDS BLOWN IN SAN ANTONE and lots more! This is one Transfusion your ears will really appreciate!

Another Black & Blue release from Punk Rock Legend Bloody F Mess and his band The Vaynes. This band rocked live as well as on this studio album. Rock N Roll with Punk Rock Lyrics!!!

For those who really love Bloody & The Vaynes you need to have this. The Remix of Empty is awesome and the new song “Unclog Your Drain” is a real fun rocker.
The final release from Punk Rock Legend Bloody F Mess and his band The Vaynes. 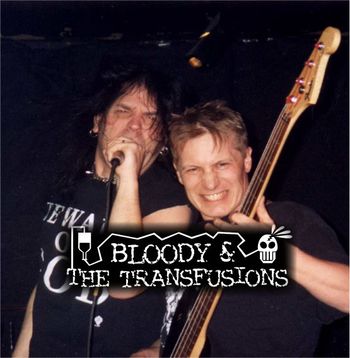 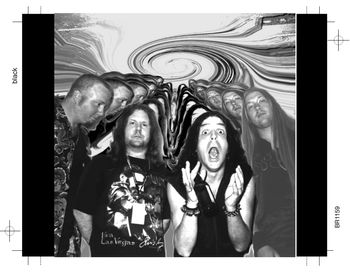 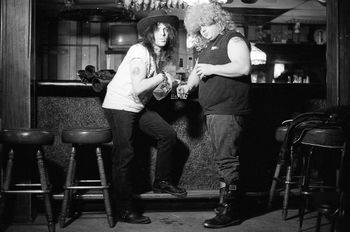 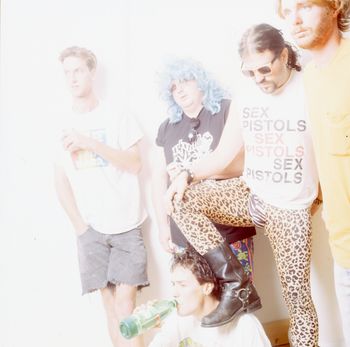 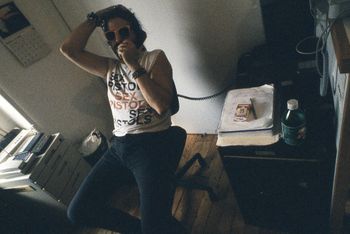 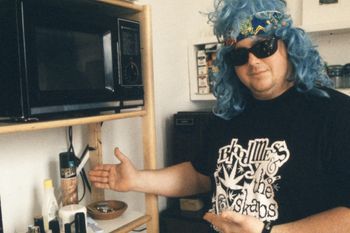 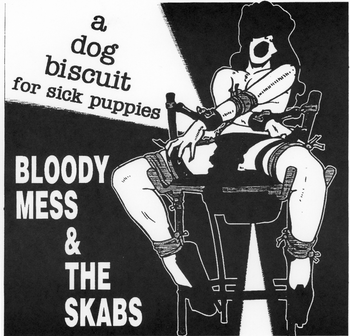 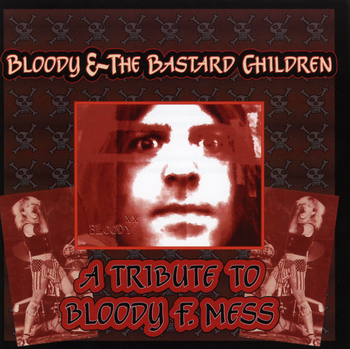 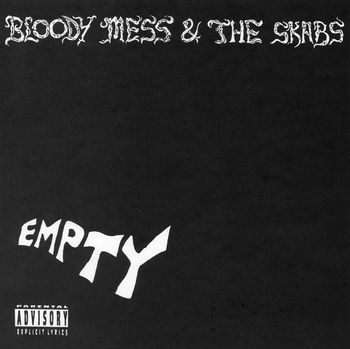 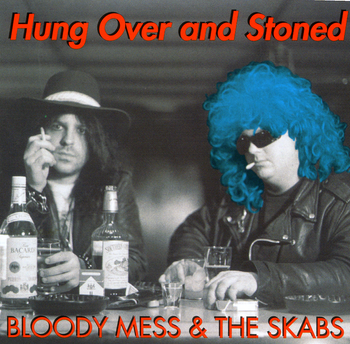 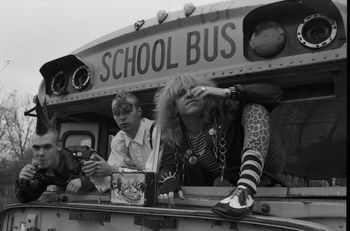