Formed late in the year 2000 on the initiative of lead singer/guitarist Lasze Liquid and drummer Tommy Traditional Turbo. Earlier that year they had been talking about starting an old school punk rock band, inspired by bands from the late seventies like The Sex Pistols, Black Flag, Sham 69, Dead Boys, etc.

They rehearsed a few times to get an exact idea of the direction they wanted to take musically, but they still needed a bass player. Later that year Lasze met an old buddy named Jens and invited him to their little cellar where they rehearsed to see what they might be able to accomplish together.
It was after their first rehearsal that Lasze wrote the song “Violent Man.” That song began the repertoire of original songs and was the opening cut on their first demo. That demo was recorded in the spring of 2001 in a cheap little studio named Paramount, in their hometown of Roskilde. Paramount is a legendary place that since 1968 had had many different bands play there, both well known and unknown names. Lots of bands have rehearsed and recorded their stuff there, and it was also a place where you could host shows.
The demo session at Paramount was produced by an old fellow named Jones, who was able to provide the perfect dirty old punk rock sound and at the same time make the band a part of that process. In July of 2001 the band released Recorded Loud To Be Played Loud as a home made CD-R.
After a few more months of writing new songs and rehearsing, Cherrybombs DK was ready for their very first gig at Paramount; it was also their debut show. Unfortunately it wasn’t quite without problems. When the boys showed up to play their punk rock tunes, a big part of the audience was radical feminists, there to see another act on the bill. The venue had actually been talking about cancelling the show since the Cherrybombs DK’s original name was Penis Rising. Apparently that had given a lot of people the wrong idea, and they thought that the boys were going play songs that put women down with dirty sexual lyrics and an adolescent attitude. Obviously this was not the case.

So here the band was waiting for their long-awaited debut, now threatened with cancellation because of some mistakenly angry feminists and other misguided idiots. Meanwhile the rest of the audience, who wanted to see punk rock, were going to miss this band’s wild, energetic debut.
The boys had been sweating and working together in their tiny rehearsing place week after week, hour after hour, and for a time it seemed like it might have all been for nothing. But at that last moment it was decided that the band could go on stage. They received a mixed reception from a pogo dancing audience and some angry and misinformed feminists.
Overall the show went pretty well, and Cherrybombs DK went straight from their debut to the studio to get some of Lasze’s new ideas together. They now felt ready to play anywhere, so they contacted a few punk bands around Denmark.
After writing some more material and playing a few more gigs in and around their hometown Roskilde, Cherrybombs DK was booked at many different clubs across Demark, to audiences that were very receptive to these three young punks’ classic Old School Punk style.
By the summer of 2003 the Cherrybombs DK decided to record some new material. They picked out six tunes and contacted producer Nicolai O.

They booked time for one weekend at Nicolai’s private studio. Amazingly productive, they quickly got through laying the music on four of the tracks on the first day, the other two on the next day, and on the last day Lasze did the vocals. They now were ready to release Punks On Parole. One humorous note from the sessions; Lasze actually didn’t quite have all the lyrics ready. So while Nicolai did some quick preliminary mixing, Lasze sat in a garden outside the studio, sweating his ass off as he found the perfect lyric for each track.
Cherrybombs DK has always been very aggressive in their way of playing the punk rock, and all of its band members have always worked hard through the years to keep the good old spirit in punk alive. That is, the crazy, wild and angry genre Punk Rock has always been.

Punks On Parole
After listening to these tracks there shouldn’t be any doubt about the passion of the three men in the Cherrybombs DK roster. This is good old fashioned punk rock from the late seventies’ Wild West. Cherrybombs DK’s main influences are classic punk bands like The Sex Pistols, Sham 69, U.K. Subs, early Black Flag, and The Dead Boys. It quickly becomes obvious that these guys add their own brand to the punk music express, going far beyond the efforts of their afore-mentioned influences. Cherrybombs DK were formed in the late summer of 2000, and ever since has followed the basic rules of the punk, namely three chords and simple lyrics. The band’s main emphasis is on keeping to the original punk rock ideas and ideals. Then everything else can get the big “Fuck It!” It’s punk, right? But here’s a quick note about the lyrics:
What are words, anyway? What we’ve written about is the basic anger and irritation everyone feels as soon as they step outside the door or put on the radio or TV.
You can describe it this fast and it can be played this hard when the three members Lasze Liquid (Guitar & Vocal), Jens Jr. Jackass (Bass & Backing Vocal) and Tommy Traditional Turbo (Drums) step into the electrical world of tunes, lyrical poetry and aggressions to take you on a time journey back to the good old punk rock of the late seventies. 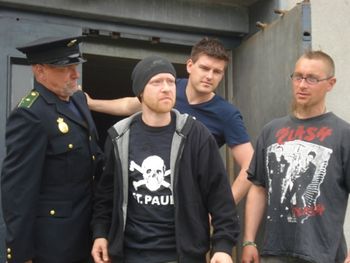 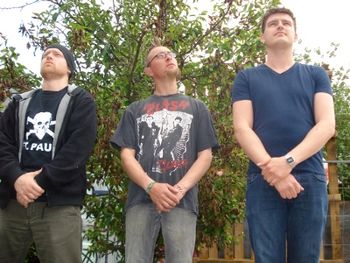