At the age of 17 Horace Lee “Pappy” Hogg was living in a trailer in Bosque County outside of Clinton, Texas in 1952 when he was drafted into the US Army. Soon he was on his way to fight in the Korean War. There he met Travis Braintree, a member of Company E of the 31st Infantry. They fought side by side at the Battle of Pork Chop Hill. On the night of April 16, 1953, shortly before midnight, a hail of artillery signaled a sudden infantry assault by a Chinese battalion. Pork Chop Hill was quickly overrun, although isolated bunkers were defended by U.S. soldiers. During this battle Pappy Hogg was wounded, and Travis carried him on his back to one of the bunkers. Hogg’s life was saved, and the two became the best of friends. After the war Hogg retired from the army, married Betty Louise Dodson, and they quickly had two sons, PJ and Junior. Braintree reenlisted and was stationed in TX. Braintree eventually met and fell in love with Pappy’s sister, Thelma Hogg, and they were married in February of 1966. After only a few months of wedded bliss, Travis was sent to Vietnam, but not before Thelma became pregnant with Jesse and his twin sister Becky Ann. That year Pappy got divorced and quickly wed his 2nd wife, Gertrude Stuckey. Tragically, in the spring of 1967 Travis was reported Missing In Action near Hanoi. He was never heard from again. Pappy took in his sister and her children and helped raise the twins along with his new sons, Neil and Robert T. The boys grew up with Jesse listening to Buck Owens, Johnny Cash and many other country heroes. The family loved to watch Hee Haw together. Pappy taught Neil and Robert T. how to play guitar, and the brothers formed a band with Jesse as the lead singer. Jesse went on to college, but he dropped out and soon was working as a salesman. In the late 80s Jesse left Texas when he got a promotion that relocated him north to New England, where he made good money. Jesse still wanted to keep singing country music, so he formed a country cover band. He called it Jesse & The Hogg Brothers to honor his family band, and the other members took up the Hogg surname for performances.

Buzz, Jethro, Little Joey and Bob were the original performing Hogg Brothers. In 1989 in a dive C&W bar in RI Jesse met Peter Yarmouth and Jesse went to TX and recorded a joke track, “Hogg Rustlin’,” with Neil & Robert T. The song appeared on a compilation album, and Jesse signed a contract to record an album that seemed destined never to come out. In 1992, Pappy wed his 3rd wife, Cathy Sue, and moved to Rhode Island to be close to her family. Pappy had PJ and Junior move in with them, and they reunited with Jesse and performed as Jesse And The Hogg Family. Both of Jesse’s bands played all over RI, MA, NH and CT playing country classics, but Jesse still longed for home and wanted to record and perform his own music. While continuing to perform up north, he never wanted to record with his “Yankee” bandmates or with Pappy and his cousins, and in 2002 he stopped performing. After some months of effort, Jesse found an opportunity for his favorite cousin. Neil & his son “Bobby”. to make money and so they moved up to MA as construction site flag wavers and Neils brother Robert T kept his promise to never go to Yankee land! So the brothers were finally seperated. The Hoggs did make good Yankee money but they hated the northern winters, and begged Jesse to move back to Texas with them.

The Hoggs had continued writing songs together with Jesse, and while up north they were pretty much inseparable when they weren’t working. In fall of 2005 Jesse finally had enough of livin’ up north, and he quit his job and came back to Texas with his cousins.

They began writing more songs and started recording music together, with lots of encouragement from Yarmouth. The recordings feature family members galore and special guest Harry Cox. They have recorded 5 CDs’ worth of music and one full length LP, the first CD White Trash Meth Lab had a January 2009 release date, with Working For Yankee Money in March of 2009 then in 2020 they finally released both Live In Harlem and Rusty Loved Christmas on CD Digipacks and the long awaited Get Hammered LP arrived in 2021! All are available in our store.

“White Trash Meth Lab”  (Black & Blue Records) If this was just a band making white trash jokes and wearing Billy Bob teeth and using fake twangs this might suck. But the beauty of the Hoggs ( who are not above white trash jokes, Billy Bob teeth and fake twangs) is that they are also making super earnest country music, old time stuff, including CB trucking songs, odes to America, and Christmas songs on both albums. If you can’t get enough of the crude Southerner comedy (and a zillion Larry The Cable Guy fans can’t be wrong) meets 1968 Opry music then get both CD’s. Other curious folks get the second CD, as it includes some improved versions of the “hits” from the first one. Flamin’ Waymon Timbsdayle Rocktober #47 Fall 2009
"Jesse & The Hogg Brothers Working For Yankee Money CD
HERE IT IS WITH NO BEEPS OR OTHER EDITING OUT THE SWEARS! HOGG BROTHERS ARE UNLEASHED, UNCENSORED and UNAPOLOGETIC! Finally the truth be told about Yankees, do I need say more? This second CD from Jesse and The Hogg Brothers is what you can expect when you catch this act live. The explicit lyric sticker is there for a reason!"
Grand Songs - CD Universe
Jango www.jango.com/music/Jesse+The+Hogg+Brothers
CD BABY www.cdbaby.com/Artist/JessetheHoggBrothers
My Country Space www.mycountryspace.com/JesseAndTheHoggBrothers
Reverb Nation www.reverbnation.com/jessethehoggbrothers
Tradebit www.tradebit.com/filedetail.php/8221893-jesse-the-hogg-brothers
http://cdbaby.com/cd/blackblue3
Facebook
https://www.facebook.com/pages/Jesse-and-The-Hogg-Brothers/137370471501 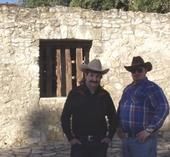 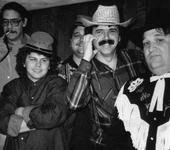 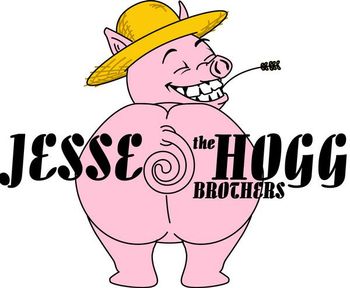