Boorish Boot Are:
Lynden Cox – vocals/guitar Warren P. Cox – bass/vocals Phil Kiklis – drums
Boorish Boot’s political views and powerful music make them a force to be reckoned with in the under­ground music scene.
The band consists of 2 brothers Lynden Cox (formerly with “Mothers of Perversion”, “Flesh and Blood”, and “The Truth”) who together with brother, Warren P. Cox (formerly with “Screaming Nipples”, “Negatives”, and “Tribe One”) co-founded the band in 1982 along with Los Angeles native Phil Kiklis (formerly with LA’s “The Rats”).
Lynden’s searching guitar riffs allow Warren to molest his fretless bass while Kiklis’s drumming steers and crashes through different musical styles.
When Lynden met Peter Yarmouth at a GG Allin show the 2 began communicating and meeting up at many big shows touring in RI clubs.
Boorish Boot was formed in 1985 and began playing all over New England on any Punk rock bill they could get on.
When playing a gig in 1986 NYC Lower East side they noticed David Geffen was in the crowd. He was not there to see them but to see Cher’s daughter Chastity (now Chas) do a Sonny and Cher spoof with her as Sonny.
This experience led to the writing of the classic tune “Geffen” with the chorus of “We don’t care about your talents, we just care who’s your parents” and when Lynden got Yarmouth to hear the tune it resulted in a 7” EP titled Death Mission. The record was co-produced by Larry Evilelf (“Bloody Mess & The Skabs”, “Northwinds) and Boris Ofterhaul. The title song off the EP takes both sides of the abortion issue. With controversial songs on the record, Boorish Boot garnered better gigs and positive press. Media reactions to Death Mission include:
“Here is one band that proves classic punk is not dead”-Tantrum
“They seem to be direct descendants of the Dead Kennedys”-Metal Curse
In 1992 drummer Kicklis broke his leg in a motorcycle accident and the band added a drummer to complete a previously scheduled tour. After that the band just faded away. Lynden joined the Cedar Street Sluts and played bass. Lynden also had a family affair joining with Warren and their sister Rose as members of Yarmouth’s joke cover band Yarmouth & The Yarmettes.  All that remember it still would like to forget.
The Cox brothers reunited in 2006 to record and tour as Tornadic Ukulele both playing only Ukuleles they play classic live and in particular Strummer Fest in the UK.
Playing together and contacting Yarmouth prompted a mini Boot reunion as they finished recording 2 songs for the upcoming soundtrack CD for Biker Ann The Movie in November of 2011. What will follow, we shall see.
In the meantime relive the punk angst on the classic 7” release or excerpts of it on the compilation CD MUSIC TO MAKE YOUR EARS HURT TOO. Watch for electronic release of Death Mission.

Death Mission 7"
Music To Make Your Ears Hurt Too 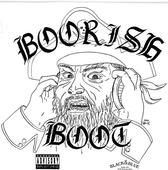